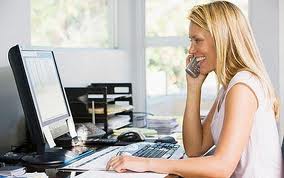 By freeing up desk space and reducing overheads through home working, employers could save themselves an impressive £34 billion, according to telecoms firm Vodafone.

In conjunction with YouGov, the firm has created a survey of 500 key decision makers on their attitudes to flexible working. It found despite the average office desk costing 'thousands of pounds a year', more than one in three managers have not considered allowing staff to work from home.

By introducing home working as standard practice, employers could get rid of, on average, 46 desks each. As well as generating billions in savings, managers could also reap undetected cost benefits as working from home encourages 'smarter', cost-effective ways of working, claims the report.

By allowing home working, decision makers who are navigating through uncertainty, especially in the current economic backdrop, could potentially save themselves cash.

Jeroen Hoencamp, enterprise director at Vodafone UK, believes firms remain "blinkered" about how to successfully implement the practice in their business.

He commented on the use of flexible working: "We need to get Britain working smarter and thinking about different ways of working.

"A potential saving of up to £34 billion is staggering and this research reveals businesses are underestimating the savings they can make through reducing the number of desks they have," he added.