Economic Update: When Will the Next Recession Be? August is a month when things can go unexpectedly wrong as so many of us have our minds on other things. We typically enjoy a 7 year cycle. We have five good growth years ahead. I think you should pay no attention to those who say the next recession will begin next year, caused by rising interest rates.

At last real incomes are rising strongly, there is work for those that want it, and even Finance Directors are becoming optimists (a state they are not naturally predisposed to enjoy). The banking system in the UK and the USA is fixed. Quantitative easing in the Eurozone is helping their banks mend more quickly, and increasing confidence.

The system of tax credits was introduced in the UK in 1999. Today it absorbs 34% of all welfare spending. Its primary purpose is to top up the income of the low paid, particularly if they have a number of children; the so called ‘working poor’. The inevitable has of course happened. Employers have an incentive to keep wages low knowing the state will make up the difference. The result is a considerable subsidy to employers from taxpayers.

Predistribution is a process of fixing the market to create fairer outcomes. The statutory minimum wage and the living wage are examples. George Osborne is clearly a convert, and it fits well with allowing the low paid to keep as much of their income as possible by increasing personal allowances.

There has been a lot of media noise in recent months on the apparent collapse in UK productivity; in the private sector we take the value of what is produced, look at the number of hours spent producing it, and divide one into the other. If there is more value from the same number of hours then productivity has risen. The value is measured at market prices. So if a firm cuts prices, reduces its margins but keeps the volume of output and number of employees the same, then arithmetically productivity is falling! The reverse is also true; rising prices with no change in hours of work will show increases in productivity. I guess you are now thinking the data is pretty meaningless; and it only gets worse when you consider the public sector.

Most public sector output is not priced, so how can we measure productivity here?

The output of the public sector is measured by what is spent producing it. So the output of the NHS is measured by its wage bill. This gives perverse data. Assume we pay a nurse £25 per hour. Her output is £25 per hour. If we double her wages we double output according to the measure, but she is likely to spend the same amount of time filling in forms and tending her patients. An increase in wages for the public sector automatically increases productivity!

When will the next recession be?

The big forecasting models take time series data, smooth it, and then extrapolate into the future. So the forecast future is a replication of the past. When the future is similar to the past this works well and forecasters can often claim accuracy. However when there is a major discontinuity such as that experienced since 2008, we have to start again from base zero. This is because a discontinuity changes rules, behaviours and relative prices. For example if you told a Brit in 1980 that in 2010 base rate would be 0.5%, he or she would consider you were bonkers!

The overall conclusion is to treat national productivity data with pinch of salt and focus on your own business. You will know what increases productivity; it is about leadership, empathy, training, motivation, working environment, mechanisation, IT that works, staff outings, Christmas parties, saying thank you, and employees having meaningful, fulfilling roles.

Download Roger's full report now and gain an in-depth analysis of the UK budget and risks to our economy, the global outlook and the next recession; plus find out what they all really mean for Britain's SMEs. 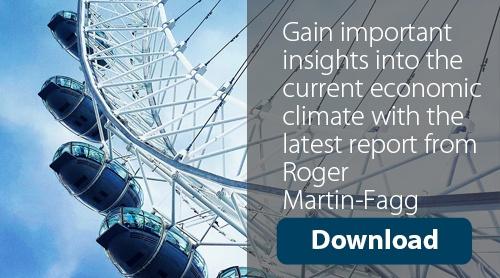