37% of those who voted, voted for a smaller share of Government in GDP, they voted for income generation over income redistribution, they voted for continuity and stability. They gave the Conservatives 12 seat majority.

The outlook is now strongly positive. The pause in investment spending which happened due to electoral uncertainty will end with a strong final half for this year. Wages are rising by 2.5%, earnings by 4%. Core inflation is 1.1%. GDP this year will grow by 5% nominal and 2.5% real.

The economy after 7 miserable years is back to normal. Yes there are uncertainties around the referendum (I think it will take place this time next year and 60% in favour of staying in).

The SNP gang in Westminster will go soft on Independence when they look at the numbers. An independent Scotland would begin life with a thumping deficit of 10% of GDP, which they will find difficult to finance at under 6%. If oil goes back to $100, it will still be a 7% deficit.

Get ready for strong growth and be a part of it. It is time to ring your preferred bank. They will bite your hand off and bend over backwards to lend you money.

The  election campaign was full of absurd promises which are undeliverable, or if applied will destroy what they are trying to fix.

On housing, all of the policies were about the demand and price side, nothing tangible on supply. Cameron is crazy to sell off social housing. Miliband was nuts to impose rent controls (all that will happen is the non-returnable deposit will rise significantly), and to freeze utility prices.

Cameron should not have promised ‘no increases in the major taxes’, he was badly advised on this. UK demographics and the pension bill will require taxes to increase (if not, the national debt will just go up!)

Since 2008, Government spending has risen every year. The rate of increase slowed after 2010 because Government income collapsed. Because of the inexorable rise in the pensions and social support payouts, other parts of Government have been cut back. The cut in the capital spend budget is the most serious for school buildings and the road network. In 2010 as a percentage of GDP Government spending hit 47%, this is because real GDP fell by 6%.

Government has NOT been the cause of austerity.

Austerity is the inevitable consequence of the excess of debt taken on by ordinary working people from 2000 - 2008. Light touch regulation of the banks (thanks to Ed Balls) allowed them to expand their balance sheets recklessly. They in conjunction with all those who lied about their income when applying for a mortgage created the biggest spurious increase in wealth we have experienced as house prices shot up.

The UK Economy slowed in the first quarter of this year as projects were delayed due to political uncertainty.

It has been impossible for any supplier to the public sector to obtain sign off because the public servants do not know who their new boss will be. When the data is revised, I think growth will have been better. A Lib Dem/Conservative coalition has served the UK well over the past 5 years. If you believe the rhetoric, an SNP/Labour coalition would have been bad for growth, investment, confidence and the value of Sterling. Failure to win a majority would have resulted in another election in the autumn, bad for growth in the short run.

The USA has experienced a slower first quarter, which the markets believe will delay the increase in interest rates.

The dollar immediately dropped in value. The Eurozone is responding to significant money creation (QE) and is likely to show a much improved output 9 months from now. Greece has told the EU that it has some red lines which are inconsistent with creditor demands for reform. A default is likely, but the impact will be minimal because the markets have priced it in, and European banks have made provisions for expected losses.

Read Roger's full open letter to the general election winners, including a brief history of the British economy and his predictions for continued growth in 2015/16 by downloading the report now. 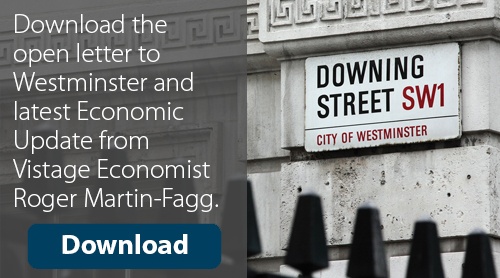