Sex in the city office 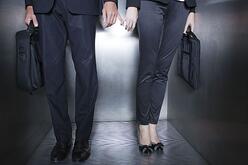 Arianne Cohen has written a slightly tongue in cheek piece about sex in the office for Bloomberg Business Week. The article is pegged on the love life of the former CIA Director David Petraeus who recently resigned after an extra-marital affair came to light. Cohen references news sources which allege that Mr Petraeus had sex with his mistress in his office. This surprised Cohen who, having done a lot of research into the subject, had assumed that the changing office environment and, in particular, the spread of open office layouts and security cameras, had wiped out such behaviour. Although, as Cohen points out, as head of the CIA, Mr Petraeus presumably had an office in which privacy was paramount.

Attitudes towards such behaviour differ widely. One gets the impression that French voters might think twice about voting for a politician who was not conducting numerous affairs. The idea seems to be that any man or woman who can juggle several lovers simultaneously is probably well qualified to cope with the demands of running the country.

British politicians are given less leeway by the electorate. On this side of the Channel, cheating politicians are viewed as untrustworthy. Generalising is not always helpful but the American people do seem to take a high moral stance on extra-marital affairs although one imagines that in the case of the CIA Director security worries may have been more of a worry.

While most of us enjoy a sliver of schadenfreude at watching the powerful being caught with their pants down, the CIA Director’s misfortune has lessons for Vistage Scotland members. Affairs and other dangerous liaisons may have an impact on your organisation but the everyday office romance can also cause problems.

The truth of the matter is that most people meet their partner in the workplace. It is not inevitable but, if you spend eight hours a day elbow to elbow with your employees or co-workers, it is no great surprise that relationships will start.

How to manage these relationships within the context of the working environment is a thorny issue. Employees’ private lives are just that: private. However, relationships between employees can, especially if they break up, have wider repercussions in the workplace. There is also the issue of relationships which can be seen to be inappropriate because the people involved have different roles within the company. No-one will blink at two members of a sales team getting together. If the MD and a junior member of the accounts department start a relationship then that organisation is likely to find itself having problems with trust and chains of command.

The human resources departments of large organisations have systems in place to try and regulate relations between members of the workforce. Vistage Scotland members may already have such guidelines in place. If not, you may want to think carefully about whether or not some sort of code of behaviour might benefit your business.