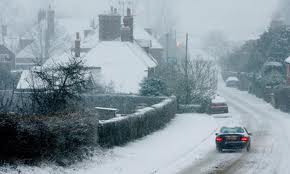 The cold winter weather is causing office workers to spend more than half an hour longer behind their desks each day.

That's the conclusion drawn up by officebroker.com, reported by freshbusinessthinking.com, which found winter workers are spending around three hours a week or an additional 12 hours a month in the office - just to avoid the weather.

However, while employees may be avoiding the winter chill, employers could be reaping the rewards of extra productivity - something that could help steer the ship for those navigating through uncertainty.

Employers were also found to be less likely to leave the office for lunch or take cigarette breaks due to the cold, therefore maximising the time they spent at their desk.

On the other hand, 22 per cent of those surveyed said they stayed longer in order to impress their employers ahead of an end-of-year appraisal, while 17 per cent wanted to make a good impression ahead of New Year Budget announcements.

A spokesman for officebroker.com commented on the survey on onrec.com: "Winter weather is causing employees across the UK to spend longer at work each day - which sounds great, particularly if it helps businesses achieve their end of year targets.

"However, delve a little deeper and the thought process appears to be centred around what is best for the employee rather than the employer," he added.