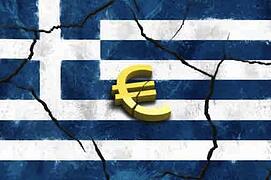 When Germany unified in 1990 it began a substantial transfer of income from West to East. With typical German efficiency, they put themselves through an economic boot camp. The SME sector underwent radical change, supported by the regional banks who were underwritten by the 16 regional Governments. Real wages fell as unions agreed to pay cuts. State benefits were reduced, particularly for sickness and disability. Companies invested in R&D, new plant and equipment and apprenticeships. The result was a 20% drop in unit labour cost compared to the rest of the EU, and a rise in unemployment to 12.1% by 2005. This was the year Angela Merkel came into office.

Meanwhile the club med countries became increasingly self-indulgent (not Ireland, it was individuals there) as their Governments found they could borrow at German rates of interest. This happened because the world markets were beginning to believe that Germany growing economic strength would underwrite the system. And French and German Banks who were short of capital, needed no capital to support Sovereign lending.
Germany increased its exports to the fringe, and France, its biggest trading partner.

France meanwhile hung onto German apron strings and fought against EU enlargement and the desire for greater competition by the Commission. France believed that Globalisation was a threat which needed to be managed, rather than an opportunity to be embraced. As the EU was enlarged, with British support, France lost power and influence.

The aging Europeans were enjoying a comfortable lifestyle, their companies asked Brussels to protect them from the Asian onslaught and in many areas they did. The French wished for more control of Brussels (i.e. more protection).

Last year, France was the only large EU country with a retirement age of 60. And the French, Belgians, Italians and the Polish all stop working in their late fifties.

Angela Merkel is fond of saying that if the Euro fails then Europe fails. However if the Euro succeeds Europe is likely to fail anyway because the Euro was introduced on the back of two lies.

The first lie was that monetary union could exist without political union. The second lie was that Euro and Non-Euro countries could sustainably co-exist. This was based on the view that the EU is a club of clubs, all members share the single market, but otherwise coexist within a flexible framework of labour laws, immigration, financial regulation and bilateral agreements.

In the last week of October 2011 European Leaders agreed to leverage the European Financial Stability Facility (EFSF) boosting its lending potential from 300Bn Euros to 1.1 trillion Euros. This is the first big step on the path of divergence between Euro and non-Euro members. It is the beginning of joint liability for Sovereign debt guarantees, thus paving the way for the creation of a Eurobond.

If this happens the ECB will require each Euro member to solve their underlying structural problems. They will be required to harmonise their financial sector, to co-ordinate their labour market rules and become more competitive. Eurozone level taxation will have to be introduced to ensure income is redistributed from North to South. Brussels will send economic policemen to oversee errant countries.
But all these measures are diametrically opposed to the founding principles of the single market. A monetary union in trouble has very different needs than a club interested in free trade. The Euro members will (under the influence of France) decide that it was free trade which caused the imbalances in the first place (Germany and France are convinced it is financial institutions based in London who are major contributors to the problem).
The Eurozone will have to create a common financial platform to ensure macroeconomic stability and the Eurobonds sell at a good price (low interest rate). Non-members have no need for such structures and would resist strongly a regime run by and in the interests of the Eurozone. There are 10 such Countries; they are smaller than the 17 Eurozone members and less homogeneous.

The Lisbon treaty allowed member states in groups to enhance co-operation in selected policy areas. This will allow further divergence between Eurozone and non-Eurozone members. It could even allow non members to gang up on the core.

Over the next five years the microeconomic club will turn into a macroeconomic union. At which point Denmark, Sweden and the UK will have to decide whether they want to remain in a club with which they have increasingly less in common.

The biggest failing of all is that the technocrats in Brussels believe that prosperity and growth derives from treaties and agreements. 70% of EU prosperity is created by firms employing less than 200 people, who day after day strive to create better products and services for their chosen customers. And yet to a man they will tell you that the biggest cost imposed on their enterprise comes from Brussels in the form of Health and Safety, Employment, and Harmonisation Reporting.
The Likely Outcome

Greece will leave the Euro within the next 18 months.

The Greeks will force conversion of Eurodebt into Drachma. This will be a technical default.

The Drachma will trade at a 60% discount to the Euro. This will impose losses on Greek businesses with overseas operations, but there will be much bigger gains as Greece becomes the no 1 tourist destination.
The Greek Government will have to impose strict limits on cash and credit withdrawals to protect their banks, plus capital controls.

Inflation will rise to 15%, wages will not, so very quickly Greece takes the pain of a lack of competitiveness. Meanwhile Costas finds all his Villas fully booked, the fish he catches cost a little more to get (fuel and spares for his boat), and he makes a fortune selling a bit of land to a plumber from Telford, attracted by cheap sunshine, and the new Ryanair routes from Birmingham City Airport. Within two years Greek GDP is growing at 3%.
Savvy businessmen will be already asking the Greeks to pay for imports in Dollars, and probably cash up-front.

The ruling Greek families who bought 10% of the London property market, will sell their house in London, buy drachma and then the assets of Greek state industries at knock down prices, thus ensuring that the market for “in yer face” Yachts booms.

Meanwhile the German and French Governments ignore Brussels and put massive support behind their local banks who book big losses on Sovereign debt. And the Bank of England has to supply circa £150Bn to the London market as the Credit Default Swap issuers are required to pay up.
Then what?

In three years time France and Germany announce a Nordic Euro system, and a Clubmed Euro system. The latter will trade at a 30% discount to Nordic Euro. And Europe will become three clubs. Inner, fringe and outer. The outers, Denmark, Sweden and the UK will expand their trade to the East, where the money is!

It will take this long because Brussels will resist it every step of the way.
What does all this mean for the UK?

It follows that real wages must fall by the same amount. And they are, inflation at 5% and wages growing at 2.2%. But not if you are a FT100 Director, when your real earnings have increased by a staggering 70%.
In the depth on the recession, the lowest bonus paid was 134% higher than in 2000. For the record, Directors always state that they are rewarded according to shareholder return. The evidence is against them. The overall reward to FT Directors has exceeded the growth in earnings per share by 640% since 2000. (Source: Hansard).

With the exception of FT 100 Company Directors, real wages will remain depressed until productivity increases. It is worth noting that productivity is falling because SME owners are trying to hold on to employees for as long as they can afford to. This is a considerable social benefit.

In essence, Sterling will rise against the Clubmed Euro, and fall against the Nordic Euro. At a guess, 25% stronger against Clubmed, and 7% weaker against Nordic.
UK Growth Prospects

I think a mild recession is 2012, followed by flat line certainly until 2014. There will be some quarters when commentators will suggest the worst is over, then it will fall back again. The cause of this flat line will be the lack of credit and money in Western economies. This in turn caused by the drive to compliance with Basel 3 by western Banks. We know from history that when banks need to make major adjustments to their balance sheets, economic growth is well below trend for 5-7 years. We are about to enter year 4, and next year the Government’s austerity measures will be biting hard.

For any improvement on this the following needs to happen. Firstly earnings need to rise by 2% above inflation. If not, then taxation needs to fall by 3% of incomes. If neither of these are possible we are left with credit needing to grow by 7% per annum (currently it is shrinking by 3%). Fat chance.

Interest rates will remain at 0.5% for certainly another two years. The mortgage rate will remain at an average of 4% providing the nation retains its AAA rating.