How to Overcome the 5 Key Challenges of Scaling Your Business The Scale-Up Institute figures quoted in a recent Vistage whitepaper report show that fewer than 4% of all UK start-ups have 10 or more employees 10 years into their lives, this demonstrates that the majority of start-ups fail to scale - Why is this?

Guy Rigby of Vistage partner Smith & Williamson sees lots of businesses that start with a visionary flourish, only to stall after failing to add more customers because they haven’t innovated or got their marketing right. They lose their way, unable to see how to get to the next stage and become one of the ‘living dead’. These businesses are going nowhere, having lost their vision and reason for existing.

Scale-up is an entirely different business environment, it’s more than just entering an accelerated growth phase. The difference with scale-ups is that the game changes so fast and often simultaneously in all these areas, when growth accelerates. And as we have seen, the price of failure is larger in a scale-up.

GETTING DOWN TO SPECIFICS: THE 5 KEY AREAS THAT WILL MAKE OR BREAK A SCALE-UP

At the beginning, the founder and the few employees know where the business is going. It’s small enough that everyone is involved. When the company hits scale-up level, these are the things that the company, and especially its leader, needs to do:

• Recognise that the informal management style no longer works
• Delegate, to recognise that the founder can’t do it all
• Articulate a vision
• Outline a cohesive strategy
• Call on mentors and non-execs who have done it before to avoid ‘reinventing the wheel’
• Maintain the culture, values and vision of the business
• Find a way to keep in touch with customers even when you’re busy keeping the company on track

All these things have one thing in common: they take time.

The founder needs space to think, strategise and plan. Who do we need to recruit in three months? When do we need to choose and order that new production line or piece of IT? When will I find time to go and talk to all our key customers to find out if we’re doing a good job for them? If the founder isn’t able to delegate and step-back from the day-to-day minutiae, they will never have the time to think about the really big stuff. Scaling up was described earlier as “a determined effort to increase market share and profits.” That won’t happen without thought and planning.

There’s one more essential aspect of leadership stamina. Roger Martin-Fagg says that many scale-ups fail, “because the founder didn’t realise how many sacrifices would be needed to keep the business going and lacks the energy and emotional resilience to keep bashing ahead in the face of problems. The process can also take a massive toll on your personal life. Failure isn’t usually about cash, it’s about the personality of the founder.”

To paraphrase the old property adage, in scale-ups the three most important things are people, people, and people. Problems of diluting the culture and vision, the chances of bringing in the wrong people are multiplied as your hiring ramps up. Here’s what needs to happen to avoid this:

Planning ahead is relevant to all these areas. Companies need to think in terms of the organisation chart in two years and hire in time. They must not leave it until they desperately need someone to start looking for them. Thinking like that will also help to avoid lop-sided hiring where they recruit in a kneejerk fashion in response to a problem in one area. For example, it’s pointless hiring more telesales unless staffing numbers in the warehouse also rise to deal with the increase in orders. The hiring process also runs throughout all this.

Hiring is so important that it shouldn’t be done just on the basis of a chat about someone’s CV. Ally Maughan of People Puzzles recommends designing a proper recruitment process involving skills testing, scenario based questioning and behavioural profiling. Spend the money to get specialist help here – you’ll be hiring so many people that it will pay for itself in the long term. And hiring the wrong person can cost more than just lost salary – you’ll be facing lost revenue as well as wasted recruitment and training time.

Companies that don’t get the IT basics right when the business is smaller struggle as it grows. In terms of operations, Graeme Freeman of Freeman Clarke says, “Things that were minor problems start to escalate as the business grows. When you start dealing with hundreds of orders, it gets much more complex and expensive errors become inevitable.

Bluntly, a massive increase in revenue can go from being a dream to a nightmare.” On the administrative side, Freeman says, “When a business gets to a size where the CEO can’t just walk around, talk to half a dozen people and get a sense of what’s happening in the business, then he needs data to run the business.” Failure to put the appropriate Management Information systems in place means that senior management are flying blind.

Start-ups will need to explore different funding sources than those they tapped as a start-up. They’ll have exhausted the funding potential of the friends and family who put in the capital to get the start-up off the ground. The choice of debt (asset based loans, invoice financing) versus equity (Private Equity, Venture Capital) is about more than just the availability of funds. Equity funding has implications for control and culture while debt can put pressure on companies to compromise longer-term strategy to meet short-term repayment demands.

And scale-up affects company finances in ways that you might not expect. Colin Mills of the FD Centre warns that rapid growth can put pressure on cash flow, not just because business that are scaling quickly are consuming cash, but because as you grow the dynamics change. “You’re dealing with different customers and equipment suppliers. As you increase the volume you order, you might be up against the credit limits of those suppliers and they may ask you to pay earlier than you expect. So you need to understand how the business model changes as you go through scale-up”.

While business leaders might intuitively recognise that many areas of the business change as the business booms, many fail to realise that this applies just as much to the sales function. It’s not just a case of adding more warm bodies to sign up more customers, as the ‘easy-wins’ will not be there when companies are seeking to increase revenues several-fold.

Managers will have to become familiar with concepts such as ‘content marketing’ and ’inbound advertising’ to educate customers rather than just selling to them. They need to think in terms of solving problems for customers, getting alongside them and understanding their goals and needs. That requires salespeople who are so much more than mere order-takers.

Going from start-up to scale-up isn’t just about accelerated revenue growth. Everything – from your staff structure to your systems and IT – has to change and adapt. Understand and anticipate that and you’ll avoid unpleasant surprises.

With so many things changing so fast, you need a core vision of where your company is headed and you need to know what your values are, what you will and won’t do to succeed.  As you bring new employees on board, whether at a junior or the most senior level, make sure everyone knows what your company stands for. 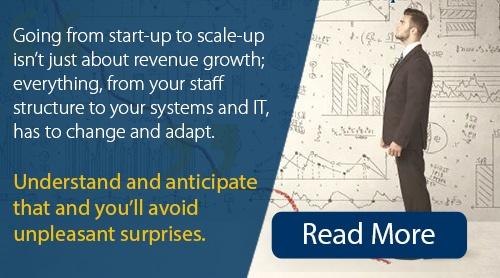 Topics: Business, Leading, Not Managing, Life At The Top, Strategy