Dream big and define your goals: why visualisation is vital to success 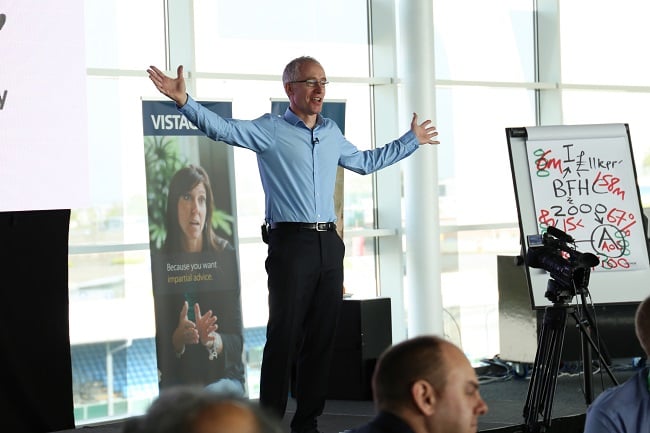 The American poet, Bill Copeland, once said, ‘The trouble with not having a goal is that you can spend your life running up and down the field and never score’. Needless to say, he wasn’t talking about football.

Dreams, and in turn, goals, are a fundamental part of the human condition. Our desire to achieve great things, to break boundaries, to have an impact on the world and people around us all begin with a single dream. Dreams don’t just give us something to aim for - they connect our hearts to the cause, creating the passion we need to drive us forward - even in the face of adversity.

From Martin Luther King to Mahatma Gandhi to Nelson Mandela, the world’s most revolutionary leaders have inspired the people around them through the strength of their vision and their unshakeable belief in it.

One person who knows the true value of having dreams and vision in leadership is Marcus Child. The co-founder of Positive Reframe and a regular Vistage speaker, Marcus believes that being the best leader you can be begins with a clear dream. Then, it’s important to set appropriate goals to create a coherent visualisation of where you want to go. Here’s how to harness that power...

Goals and dreams may seem interchangeable, but they are two separate things. A goal is an aim, something which we can focus our efforts on to reach. Our goals may be derived from our dreams but the dream is the thing which sparks joy and ignites our imaginations - it reflects our innermost desires and therefore our very identities.

If Martin Luther King had said ‘I have an aim’ or ‘I have a goal’, we probably wouldn’t be talking about it right now. It wouldn’t have fired up the collective hearts and minds in the way ‘I have a dream’ did. We may think of dreams as whimsical or indulgent but in reality, dreams are big, bold and unapologetic.

Having a dream begins with a question: what do you want? What do you really want? What is your heart’s desire? Connecting with this and having a clear visualisation of what it looks like will allow you to set the goals you need to get there.

Of course, there are short-term goals and overarching long-term goals - it’s the difference between a chapter and the narrative curve of a whole book. Where do you want to be next year and where do you see yourself in ten years’ time?

While many leaders can answer this, Marcus believes that too often we undermine our own potential by setting the bar too low. ‘Is the picture big enough?’ he asks. ‘Are we asking something of ourselves which is properly enriching and big enough, or are we playing it safe?’

In order to spark passion and spur innovative thinking, Marcus believes leaders need to challenge themselves and their teams by aiming higher and reaching for the stars. Having a picture of what you want to achieve is one thing, but that picture needs to be exciting and inspiring.

As he says: ‘The size of the question determines the response. If we are properly audacious, bold and exuberant in our goals, everything goes to work. When we ask new questions we kick off all sorts of chemistry that we otherwise wouldn’t have’.

Both dreams and goals give us ‘a chequered flag or finish line’ as Marcus says: something clear to aim for. By having a constantly reinforced, clear picture of where you want to go, he believes our brains find a way of getting there.

Dreams inspire us all

But there’s another reason that dreams are important. Dreams and big ideas are contagious: they have the power to engage and inspire your team. When people are engaged and energised, they don’t just clock in and do their job, they feel invested, they think outside the box, they go the extra mile, they come up with innovative ideas.

The best leaders know the importance of having clear dreams and goals but they also know they’re not the only ones with ambitions. As a leader, finding out what drives the people you work with may take time and effort, but it’s worth it.

When you know what someone’s aspirations are, you begin to truly understand them. This helps you develop a deeper connection with them, and crucially, allows you to find the best ways to engage, motivate and reward. You learn how to sell them an idea and how to help them develop their skills and career. All of this leads to more engaged employees, and engagement leads to better productivity and retention.

Our dreams and goals should make us feel energised and impassioned. If they don’t, they won’t work - we’ve either focussed on the wrong thing or made the picture we’re aiming for too predictable or easy.

Marcus tells the story of the youngest ever golf player to get a hole in one in open play. When asked how she did it, she replied, ‘Isn’t that what you’re meant to do on every shot?’. Marcus explains the power of this type of psychology: ‘We don’t get what we want but we do get what we expect. The good news is we can re-train that expectation by making different suggestions to ourselves and others’.

Both dreams and goals need detail. Creating a granular visualisation of what we want or where we’re aiming serves two intertwined purposes. It clarifies your target or goal and, at the same time, drowns out thoughts which are negative or unhelpful, giving you ultimate focus.

‘When Jonny Wilkinson used to do that thing, bending and scooping his arms, gathering a sparrow (his composure ultimately), he sees a dotted line from the ball over the posts which lands in a box of popcorn in Doris’ lap. Doris isn’t there, of course, but he’s imagining she is, imagining exactly what she looks like. Why would a grown man in front of 80,000 people do a thing like that? All the time you’re thinking about the popcorn splattering, you can’t be thinking “what happens if I miss this?”

Visualisation gives you focus; it ensures your mind stays fixed on the moment and on the task rather than letting negativity or doubt creep in. Marcus believes this also feeds into the language you use as a leader. ‘All the time you’re talking good news to your team, you can’t be thinking another way,’ he says.

When Sir Alex Ferguson gave a talk to a group of undergraduates at Harvard, he said the two most important words you can use - and should use with frequency, as a leader - are ‘well done’.

The impact of these two words shouldn’t be underestimated, as Marcus explains: ‘It’s affirmation of the spirit, affirmation of the person. They did it at Muller. Their score for engagement six months later was 19.6%, a year later 37%, a year later, 48%. When Stewart Gilliland left it was 68%. On 68% Muller had made more yoghurt, sold more yoghurt and had less throw away - it was their best year ever.’

While some people feel there’s such a thing as too much praise, Marcus disagrees: ‘I’ve never met anyone yet who said “I left that company, had to go - I got too much praise”.’

How we say things has a huge impact on those around us. The wrong language can deflate or defeat both ourselves and others. Conversely, choosing words which are positive or uplifting can boost morale, motivate and edify people - all of which keep you moving towards your end goal.

As Marcus explains, ‘there’s a big difference between “I don’t know” and “I’ll find out” or “I’m nervous” and “I need to be confident”. Whatever we say goes one way or another and we get to choose, we can master this’.

By being conscious about your language and striving to make positive changes, you set a tone and example which in turn fosters a culture based on ‘can’ rather than ‘can’t’.

The importance of having a dream can’t be overstated. It’s one of the core facets of being human. When we truly connect with what we want and combine it with visualisation and positive affirmation, we have a real chance of getting there. As Marcus puts it: ‘If you never had the destination set, you’d never get the beauty of the unconscious finding its way there. So keep on about the picture, repeat it, suggest it to your subconscious, say it to others, keep it front of mind, back of mind, in mind, and your brain will find a way of getting from here to there in ways you can’t explain’.

Marcus is one of our brilliant Vistage speakers. You’ll find him and many other business experts at our events – find one near you.