The Vistage Executive Summit 2017: A story of change and of growth 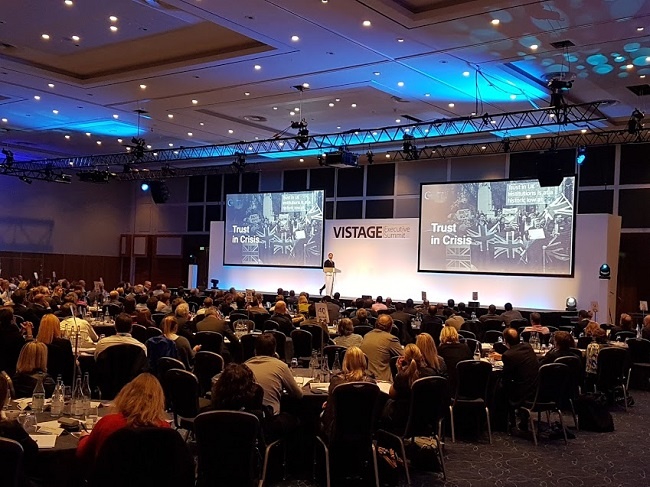 As the dust settles on the first ever Vistage Executive Summit, held on Friday 1 December at the Intercontinental Hotel O2, London, we’re left excited, inspired and illuminated both by the incredible speakers and you, our Vistage members and guests.

In 2017 and beyond, the challenges for business leaders are greater than ever - constantly shifting political climates, disruptive technology, a new wave of talent that requires more focus and a different approach. But from talking to delegates over the course of the day, you’re up for the challenge. There was an energy that suggested that trying times bring out the best in our business leaders. Or perhaps it’s simply Vistage members buoyed by the support of their chairs, groups and networks facing these problems together that was so inspiring. 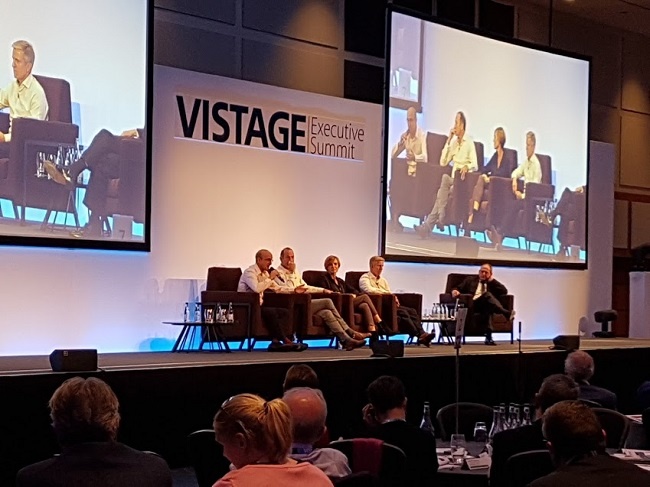 While we can’t cover all the insights here (look out for the talks available online soon), the day was focused around building a talent strategy for the 21st century - acquiring and retaining the best people to help your business innovate and grow. Central to that conversation was the story of change, of growth, and of opportunity for business leaders who embrace new business dynamics with both hands.

In the first afternoon session, the hyperactive Seth Mattison, Chief Movement Officer for Luminate Labs, proposed a change in hierarchical structures both in business and life itself. The traditional org chart, he argued, was dead. The top-down way that society structures itself is a thing of the past.

“How many of you have children that have learnt something through a YouTube video?’ he asked. Many hands were raised. ‘And how old was the person in that video, giving them that tutorial?’ The answer, generally, is rarely out of their teens. While grandparents and parents would traditionally pass down skills to younger generations, now kids are learning from their peers - from videos, podcasts, all manner of online information. They’re taking control of their own learning via the vast network of the internet. The hierarchical structure isn’t there any more.

The same, he argued, was increasingly true of business. The traditional org chart is weighed down with certain rules, values and expectations. For a generation of self starting Gen-Z’ers, this doesn’t fly. They want to feel part of something, to be involved and on a level playing field across the business - to be granted a certain amount of entrepreneurial freedom within the business.

For anyone who hasn’t seen Balaji Krishnamurthy in full flight, it’s a thing to behold. His excitable delivery is like an out of control machine gun full of business wisdom. His talk - Culture by Intent: Stewardship, People and the Environment - laid down the gauntlet to business leaders as the stewards of the business. The business leader, he argued, is solely responsible for setting the tone, the focus and the all-important culture of a business.

Pre-empting Seth’s insights, he said that the needs of the modern workforce have totally changed. The old model - ‘honest work for honest pay’ - has shifted. What people want now is ‘meaningful pay for meaningful work’. SO what is meaningful pay? It could be that time is important to your staff, in which case, flexible working hours are far more important than a pay rise. The key message - money isn’t the be all and end all.

So what about meaningful work? This comes down to culture: employers need to create an environment that’s attractive to employees, now more than ever. What’s your culture? ‘Whatever employees say about your business at the pub,’ Krishnamurthy explains. It’s a subject that was covered by Mattison, too. He called this desire for meaning ‘the experience revolution’ i.e. ‘the totality of an employee’s engagement within the business’. Honest work for honest pay is no longer enough.

Of course, even in these non-hierarchical, democratised, utopian visions of the future of business, you still need to manage staff for good and for bad. Both Krishnamurthy and Mattison were keen to bang the drum of openness and honesty. The unprecedented access to information we currently have, Mattison argued, affects who we trust. If employees don’t trust leaders, engagement goes down or they leave.

These unengaged staff are what Balaji called incumbents, those staff who started as the kind of people you selected for the role, but whose performance has since plateaued. They’re stale, unmoving, their performance levels have dropped and they are not helping the business. ‘Imagine if all your staff left tomorrow,’ he asked. ‘And that you have the chance to hire each of them back. How many of them would you absolutely have back?’ These are the selectable few, the people who you absolutely would. The others are coasting. ‘You know who they are,’ Balaji explained, ‘AND THEY KNOW WHO THEY ARE TOO! But no-one says anything.’

His point was, regular, consistent, constant dialogue is a MUST to get the most out of all employees. If these incumbents had been told from month one that ‘this has been a great month, I would hire you back tomorrow’, then the month where you say ‘I’d be in two minds about whether I’d hire you back next month’ would have far more impact.

Expectations have to be set first so that the difficult conversations are easier to have and more impactful when they happen. Mattison said we need to ‘amplify transparency to lead the light.’ This means communicating rationale, cutting the script (i.e. having direct, real conversations) and regularly checking in, i.e. doing away with the monthly, and checking in weekly or bi monthly to assess progress.

And it’s failure to attack this highest bar that hampers many work relationships and talent management issues. This culture of openness was touched on in Erin Mayer’s fantastic talk on Global Business Cultures, where she spoke of Netflix’s adoption of an approach called ‘Radical Candour’ - essentially, fearless honestly.

The point is, transparency, honesty and integrity are obvious values for a business. But how many leaders actually truly embody them? They might look like good posters to put up in the office, but unless you live by them, you’re being dishonest.

In his talk - The Science of High Performance - The Times columnist and author Matthew Syed focused on the growth mindset, again with transparency playing a huge role. He illustrated the importance of this growth thinking using the aviation and healthcare industries as examples.

The aviation industry has one of the best safety records of any industry, with a failure rate of just 0.09% for all flights globally. The reason? They’re never satisfied with anything being suboptimal. And they have a built in mechanism for analysing failure, the black box. These insights have driven accidents down, and openness and transparency have been a driving factor to do so.

This is in stark contrast to the healthcare industry, he said, which has traditionally operated with a fixed mindset. Once you make it as a consultant, that’s it. You’re at the top of the pile. When you get there, anyone who questions process or results is a challenge to your authority. In an area where suboptimality is death, this has fatal consequences.

Mistakes are opportunities to improve. This means listening to staff, not burying your head in the sand, and questioning everything, even yourself. Matthison, again, covered similar themes, calling out the fear of failure as a barrier to innovation, going further to explain that businesses need ‘room to break things’ to grow.

The last talk of the day was from Simon Timson, the current LTA/British Tennis Performance Director and previously Director of Performance at UK Sport (2013-2016). Using his time at UK Sport in the lead up to the Rio Olympics as an example, Timson explained how meticulous planning was the key to the team’s success.

Often business leaders are bombarded with insight and information - ‘you need to do this, you need to do that’ - it can be overwhelming. What Timson explained was that their success was four years in the making. He split their progress into each of the four years:

Year 1: Engage and collaborate - Integral to Olympic success was creating trust, collaborating with all the key players in the strategy and aligning their efforts to achieve their goals. The famous quote ‘culture eats strategy for breakfast’, he said, was nonsense. ‘I don’t buy it’. An evidence-based strategy coupled with a transformational approach equals a high-performance culture.

Year 2: Transformational management - This goes back to honesty, openness and setting expectations. What you need is a high strategy coupled with a high performance culture with clear insight into what’s required from everyone. Under performers need to be dealt with quickly.

Year 3: Fostering belief - It’s one thing having a transformational strategy in place, but it’s another to instill belief throughout the business. The business leader’s job is to create that culture of belief, to get people bought into their vision. The way to do this is engage the end users in design and development. ‘Assumption,’ Timson explained, ‘is the enemy of excellence.’

Year 4: Managing expectations - Managing expectations for the Olympics team meant fostering confidence without getting carried away, and easing the pressure on the athletes when it came time to perform. When expectations are set and everyone knows what their roles are, the job of the business leader is to ease the pressure. Yes they need to set a culture of high performance, but teams rarely perform optimally when pressure is piled on. The point of this long term, deep strategy planning is that every element, processes is in place for high performance.

The day was full of inspiration and of insight, but for the business owners who went back to their desks and the day-to-day whirlwind of activity, real change is not immediate. For Timson and the Olympic team, success was four years in the making. For business, too, change is not overnight, it takes time.

However, despite this long term planning, innovative disruptors have a clear line of sight to success. Seth Mattison quoted the ice hockey legend, Wayne Gretzky, who said the secret to his success was: “Skate to where the puck is going, not where it has been.”

Talent management is one part of a wider business conversation, one which takes deep thought and careful planning to get right. Yes, you need to ‘break things’ to be disruptive, yes, new talent wants freedom and meaning to their work, and yes, hierarchical structures need to be rethought, but these things are part of the culture of a business. And that can take time to change.